In the late 1750s, British writers, merchants, and diplomats responded to trade tensions with China by imagining how cross-cultural forms of civility might bridge the political divides between the two empires. Some Englishmen hoped that showing China and Europe as geographically distant but equally polite empires with shared standards of gentility would foster greater feelings of friendship between them. In turn, this would ease the way for the trade demands of the East India Company in China. Charles Over’s Ornamental architecture in the Gothic, Chinese and modern taste participates in this line of thinking by combining seemingly different architectural styles, the Gothic and the Chinese, into a single book. He unites these two under the category of “Ornamental”, thus suggesting both Europe and China were advanced cultures with artistic sensibilities that moved past creating purely functional architecture a long time ago. Not only do European and Chinese ornamental architecture evince a comparable mindset, but they also share formal qualities according to Over’s images. The similarities between A Chinese Temple and Gothic Temple (Fig. 1 and 2) demonstrate this well. Both employ pillars to create open air structures, and ornate, foliate, sculptural moldings decorate their domed roofs topped by spires. Even though these two structures do not share the same shaped base, Over liberally utilizes square, hexagonal, and round bases in both Gothic and Chinese structures in other illustrations. Over’s work ultimately imparts feeling of likeness rather than difference in Chinese and European ornamental architecture. 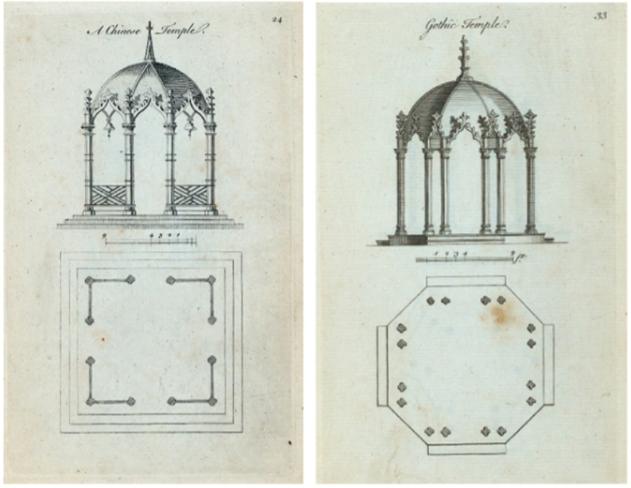 Inspiration for Over’s images probably came from travelogues of the Far East or books like Designs of Chinese Buildings, Furniture, Dresses, Machines and Utensils (1757) by famed architect William Chambers, rather than a personal visit to China. During the seventeenth and eighteenth centuries, traveling to China was nearly impossible for average Europeans. Consequently, many relied on export objects, like porcelain and lacquer, or travelogues written by missionaries and representatives of trading companies for information about China. Jean-Denis Attiret, a French Jesuit and a painter in the Qing court from 1739 to 1768, was instrumental in conveying the spatial articulation of Chinese gardens to European audiences. Attiret’s account of the Chinese imperial palace complex, Yuanming Yuan, established continuous and surprising variety as the defining characteristic of the Chinese garden. Translated into multiple languages, his letter was frequently quoted, and it contributed enormously to the popularity of Chinese garden design throughout Western Europe. The first abridged English translation of Attiret’s account emerged in England in 1752, and it is likely that Over could have accessed it. 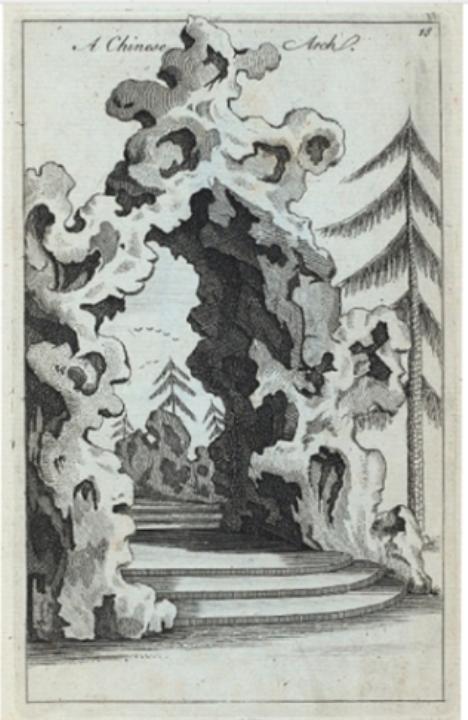 Over appears to be responding to Attiret in several ways. Although his book makes a concerted effort to highlight the similitudes between Chinese and Gothic ornamental architecture, his depiction of A Chinese Arch (Fig. 3) capitalizes upon Attriet’s description of Chinese arches as “form’d in a very pretty Manner, but very different from any thing that I have ever seen in Europe.” With its fluid, almost smoke-like form, Over’s Chinese arch stands in marked contrast to the weighty, symmetrical arches handed down from Roman antiquity. In this image, Over conveys a touch of the unexpected and irregular qualities of Chinese garden design that Attiret loved. Attiret proclaimed that Chinese gardens possessed “beautiful Disorder,” and the format of Over’s book also embraces that quality. His images do not give the impression of being arranged in an organized manner. This, combined with a notable lack of text outside of the minimally descriptive labels at the beginning of the book, make for a rather mysterious viewing experience. Over does not provide his reader with instructions on how to use this book or arrange ornamental architecture in the real world, although he makes a nod to actual space through the inclusion of sparse measurements and a plan of each building on most illustrations. Rather, he provides his audience with an opportunity to use their imaginations and to conceptualize a garden space as unique and unpredictable as the one described by Attiret. Light and small, this book could easily fit in a pocket. One can imagine an English gentleman or lady carrying it with them as they walked around planning their fantasy garden.