The posthumously published Strange Voyage and Adventures of Domingo Gonsales, by Bishop Francis Godwin (1562-1633), is a curious entry in the history of early modern science fiction, being one of the earliest works in English to detail a journey to the moon. Whilst an imaginary voyage, Godwin’s account is echoed in wider concerns with the scientific discoveries and astronomical debates of his day. His narrative, too, written as a first-hand travel account, owes something to the burgeoning European demand for factual travel literature, chronicled in beautifully illustrated and often widely translated volumes by missionaries, merchants, and travelers who wrote about their experiences of the world beyond Europe. Strange Voyage can perhaps be read as an imaginative rendition of the then-popular travel narrative, charged dually with fantastical fervor and intense familiarity as Godwin sends his protagonist, a Spaniard named Domingo Gonsales, toward the unwitting discovery of new cultures, landscapes, and technologies.

The first edition of the book debuted in England in 1638, published as The Man in the Moone under the pseudonym Domingo Gonsales. But, as we learn, Gonsales is the name of the fictional narrator of the story, and it is only in later reprintings that Godwin is accredited authorship. By the end of the seventeenth century, a second edition of the book was released, along with translations into Latin, French, Dutch, and German. The continued popularity of the picaresque novel led to an abridged edition in 1768, over a century after its original publication under the reworked title, Strange Voyage. This version includes additions to the text not found in the earlier editions, such as a short passage describing Saint Helena, which, at the time, was an important maritime hub for ships sailing across the Atlantic Ocean.

One copy from the 1768 print run is held in Fales Special Collections at NYU. On the title page, its printer is noted as London bookseller John Lever, and a handwritten inscription claims the book passed through the hands of John Warneford Armstrong in 1795 (Fig. 1). The title is accompanied by an engraved frontispiece, providing an introductory image of Gonsales. In the illustration, he is being lifted into the air by a flock of super-strong swans, who carry him in a curious contraption above a small rocky island. Far below him is a fleet of ships headed to Spain, and a group of “barbarous rascals” who, Gonsales exclaims, “would have cut me to pieces” had he not fled (19). Barely making it off the island, Gonsales approaches yet another thrill, as his swan mobile heads upward toward the moon. 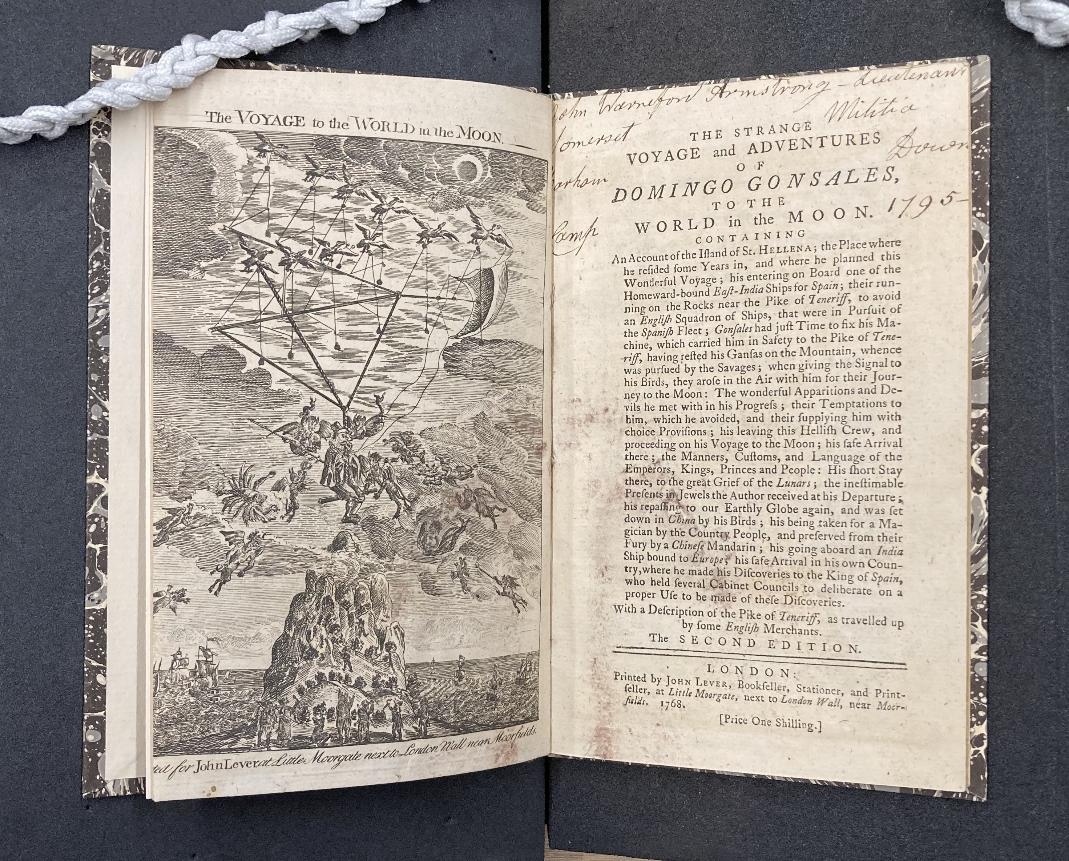 Fig 1. Engraved frontispiece and title page from The Strange Voyage and Adventures of Domingo Gonsales, 1768. Pages have been trimmed and rebound in a decorative marbled case, possibly work of the twentieth century. Photo by author.

Interestingly, the illustration shows Gonsales already adrift between factual and fictive spaces. He is not on earth, nor on the moon, but somewhere transitory, where he encounters “illusions of

devils and wicked spirits (27).” More quirky than devilish in appearance, these winged creatures can be seen swarming Gonsales, offering him assistance in returning home to his native Spain, to which he politely declines in pursuit of his cosmic journey.

In the book’s fifty pages, Godwin’s Gonsales covers significant geographical ground, beginning in Spain, advancing to a utopic paradise on the moon, and ending in China, where he is ultimately detained. The impressive detail and description of the adventures recounted in this book certainly did not come from Godwin’s own experience as a clergyman. Rather, details of ocean navigation were likely gathered from the journal entries of Thomas Cavendish (1560-1592), and descriptions of China from the Jesuit missionary diaries of Matteo Ricci (1552-1610), among other important works. Lacking an actual account of the moon, Godwin, from the perspective of Gonsales, finds aspects of the lunar paradise indescribable. Yet, woven into the extraterrestrial narrative are direct references to Copernicus’s postulations about planetary rotation, suggesting Godwin’s engagement with the astronomical affairs of the sixteenth and seventeenth centuries.

Though a work of fiction, complete with gripping adventures, whimsical landscapes, and an ennobled explorer, Godwin’s Strange Voyage can be placed within the context of its time, rapt in conversation with Europe’s growing fascination for exploration, travel literature, and scientific advancement. To partake in Gonsales’s journey from the Earth to the moon and back, visit the book at NYU. The cost: one shilling.