Smith’s Colorful Illustration of Howqua’s Garden in the Midst of the Opium Wars: A Garden of Pleasure or Perplexity?

With the plainest cover design that looks like a modest notebook, and in a portable size that could be easily put in a purse, To China and Back: Being a Diary Kept, Out and Home is, unsurprising, a diary. As stated in the Preface, this “little book is really what it is called…and nothing more.” Candidly and humorously written, Smith records his journey to Hong Kong and Canton in 1858 in the tone of an old friend who keeps prattling on about his exciting trip. The content ranges from the description of a memorable Chinese meal to the copy of a program for a peepshow related to his trip that he created upon returning home (see Fig. 4).

The vividly colored frontispiece, entitled Howqua’s Garden, Near Canton, is the book’s only illustration (Fig. 1). It presents an enticing view of the gardens of Howqua (Wu Bingjian, 1769-1843), the richest man in the world prior to the First Opium War (1839-1842). During the eighteenth century, Qing China had been largely closed off to Westerners, and Canton was the only port open to foreign commerce. In 1803, Howqua became head of the Ewo hong (foreign trading house) in Canton, and with the court’s permission he monopolized the trade between China and the West and became the largest creditor of the British East India Company. He exported tea and silk while importing Western goods, and later got involved in highly profitable opium smuggling. It was this latter trade that gave rise to the Opium Wars and led to the end of Qing China. Howqua’s story complicates our view of chinoiserie as well as Sino-European relations in the nineteenth century. His economic success claimed him and China greater power than Europe, yet he also became the man of eternal guilt by selling opium and has been portrayed as a traitor in the Chinese media. Meanwhile, of the three million dollars that the Qing government had to pay the British as stipulated in the Treaty of Nanking, Howqua contributed one million. On his gravestone, the inscription says, “The imperial’s royal edict honored me as the man of loyalty and righteousness. I am just a commoner that happened to be born in the rise and fall of the country (庭榜玉诏，帝称忠义之家；臣本布衣，身繫興亡之局).” 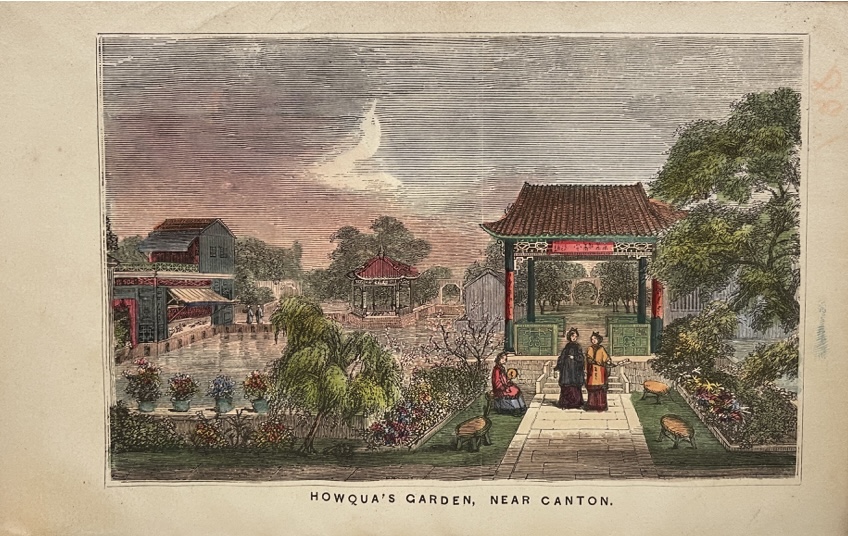 Fig. 1. The frontispiece. Howqua’s Garden, Near Canton. From To China and back. Photo by author.

In Smith’s book, Howqua’s garden is illustrated with a meticulously calculated and dynamic composition. It is divided in half by an invisible line. The right side, involving human activities, is juxtaposed to the left, a relatively quiet area dominated by a pool with a water kiosk. The pool is bordered by a boat hall (船厅), a typical building featuring a two-storey back room in the style of Chinese pleasure boats, whose presence associates the garden with leisure. On the right, we see two women dressed in loose Chinese robes who seem to have just exited the pavilion. They walk towards us while talking to each other, stretching their arms outward in opposite directions. On the one hand, they display a self-contained symmetry, an element highly appreciated in China. On the other hand, as the tree on the right has audaciously entered the image, interrupting the scene, the women’s open body gestures give us space to breathe and join the party. Meanwhile, another woman sitting on the bench functions like an interweaving phrase in a fugue, making the bracketed episode less stiff. Holding a fan, she too turns her face towards the viewer, joining the group in welcoming us. Altogether, the hospitality trio delights and perhaps encourages us to view Howqua’s largesse through rose-colored glasses, before the troubles he helped initiate.

Smith traveled to Canton in the midst of the Second Opium War (1856-1860), when China had already declined and Howqua was already deceased. During that conflict, the Italian-British war photographer Felice Beato made an albumen print of Howqua's Gardens that seems completely different from the frontispiece illustration: some plants are wild, others are withered—seeming signs of destruction (Fig. 2). In 1860, the Illustrated London News reproduced the picture of Howqua’s Garden from Smith’s book. The colorful frontispiece contradicts Beato’s documentary photograph of a withered garden. In fact, the garden was burnt down during the Second Opium War, and the objects were either lost or sold. Hence, Smith’s frontispiece could be read either as a nostalgic image or as an ironic celebration of Britain’s two defeats over China the First and Second Opium Wars. 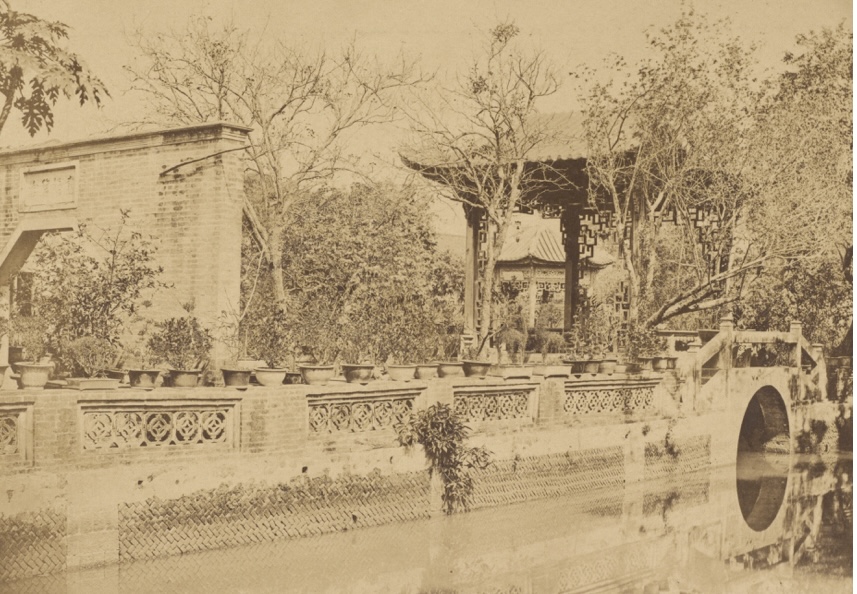 After his visit, Smith, a renowned entertainer, could not wait to share his fantastical version of China in the peepshow “Mont Blanc to China” at the Egyptian Hall (Figure 3 and 4). The question is, which China was Smith envisioning, and what was his message in the show? Figure 3 shows the images of China that Smith included in his exhibition. Similar to a kaleidoscope, a peepshow comprises a series of pictures viewed through a magnifying glass, giving them a kind of magical aura. In this case, by bringing what he saw of China up close, Smith’s peepshow allowed viewers to fantasize that they themselves were in Howqua’s garden, thus giving them a sense of inhabiting, enjoying, or perhaps even owning it. 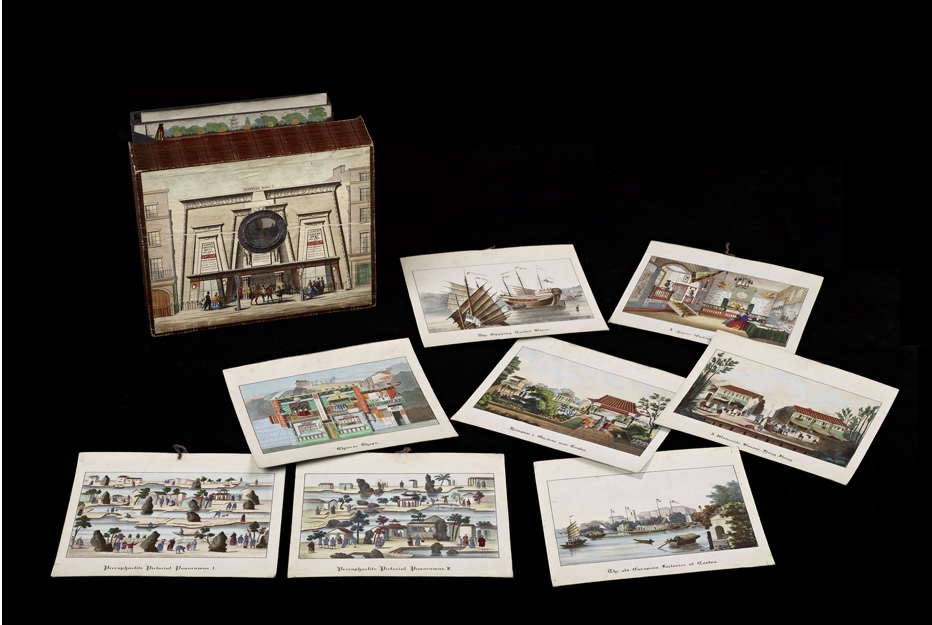 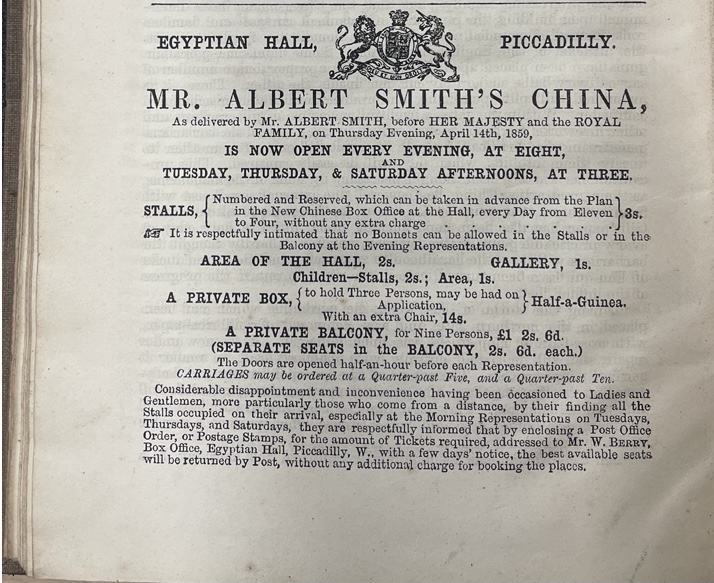